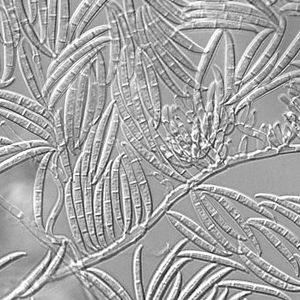 Fusarium is a large and very import genus of plant pathogens, probably with more than 300 species. Species of this genus occur in all parts of the world and infect many species of plants. They often cause lethal diseases and severe losses to crops. These include wilt diseases, damping off, rots or blights. In addition, the species produce a variety of potent mycotoxins like fumonisin or trichothecenes.

Many species are soil-borne (e.g. Fusarium oxysporum) and enter the host plant through the roots. In some species, the conidia are air-borne and disperse by wind or rain splashes. In the environment, the fungus persists in the soil or in plant debris, usually in the form of durable chlamydospores. The use of resistant varieties is often the most practical method to control Fusarium diseases.

For a review on the systematics of this genus see Aoki et al., 2014.

Fusarium species form 3 types of asexual spores:
• Microconidia are 1-celled and oval. They are important for the movement of the fungus to other parts of the host plant, e.g. through the vascular system.
• Macroconidia are multicelled and spindel-shaped. They can spread the disease over short distances, e.g. to neighbouring plants.
• Chlamydospores are thick-walled resting spores and persist in the soil for several years.

Some Fusarium species have sexual stages which appear under certain conditions of temperature and moisture. In this stage ascospores are formed which are typically elliptical with 1 or more septa. Ascospores are air-borne and can disperse over longer distances. Sexual reproduction can be homothallic (self-fertile) or heterothallic, requiring the contact between two mating types.

The following species are currently entered under Fusarium (genus):