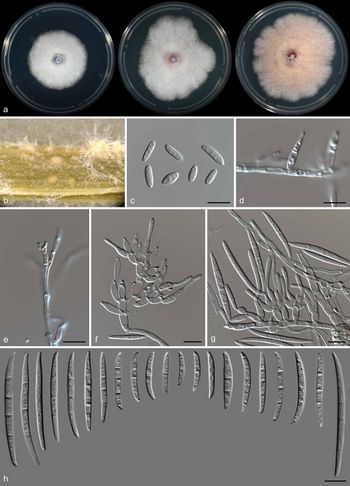 The fungus has a worldwide distribution and infects cereals like maize, rice and sorghum as well as many other crops, e.g. onions or asparagus. The fungus causes rots and other diseases like stunting and chlorosis. On maize it mainly infects the young leaves causing rotting and necrotic lesions. On Allium crops it causes basal plate rot, the interface between the roots and the bulb. A similar disease is caused by Fusarium oxysporum f.sp. cepae. This disease can also affect stored onion and garlic bulbs. Stem rot (e.g. of leek) or root rot of soybean have been also reported.

The fungus produces a broad range of mycotoxins like fumonisin, moniliformin, fusaproliferin and beauvericin which can have serious health risks for humans and animals. The fungus has been also described to cause infections in humans. The fungus typically spreads through infested seeds and planting material.

F. proliferatum is related to other species of the Fusarium fujikuroi species complex. Microconidia are the most common spores produced in culture. They are usually single-celled and oval to pyriform (club-shaped), measuring around 5-12 x 2 µm. Macroconidia are uncommon in cultures, spindle-shaped and curved, usually 3-septate and 20-35 x 2-4 µm large. Chlamydospores may be also formed in culture.