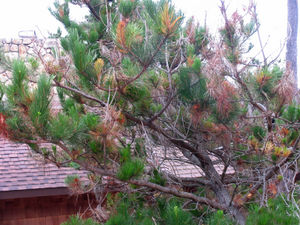 This fungus causes pitch canker of pines, resulting in plant death in nurseries and mature trees through heavy infections of the stem or stem breaking. The disease was first noticed in North America (records dating back to 1945), where the fungus was originally described as Fusarium subglutinans f.sp. pini. It has been recorded since 1953 from Central America, since 1981 from Japan, since 1991 from South Africa, since 1995 from Europe, and since 2001 from South America. In 2020, it had been reported from a total of 14 countries around the world (Europe 4, Asia 2, Africa 1, and the Americas 7) and appears to be still spreading (Drenkhan et al., 2020).

The symptoms in nurseries are mainly damping-off and wilting of the seedlings. In mature trees, infections lead to heavy exudation of resin. The fungus has been also found infecting grasses (without causing symptoms) and causing ear rot of corn.

For a review and diagnostic procedures see the respective EPPO datasheet (2019).