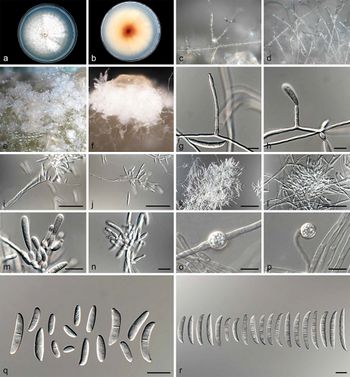 
This species is one of the most important disease-causing fungi which occurs in all parts of the world and infects many crops, causing economically important and lethal wilt diseases. The fungus is soil-borne and invades the plants through the roots. It infects primarily the vascular system, causing a rapid decline (vascular wilt). The use of resistant varieties is the most practical control method.

The exact identity of this species was not clarified until 2019, when Lombard et al. designated an epitype (from a rotten potato tuber collected at the type locality in Berlin, Germany), provided a detailed taxonomic description, and compared it with other closely related Fusarium species which together form the Fusarium oxysporum species complex.

Apart from the DNA structure, F. oxysporum s.s. can be distinguished from closely related species by the morphology of its crescent-shaped macroconidia, and the production of abundant bright orange sporodochia on carnation leaf pieces. Apart from strains infecting potatoes, Lombard et al. (2019) have identified also strains from Protea sp. (South Africa) and from tea, Camellia sinensis (South-East Asia) as belonging to Fusarium oxysporum s.s.

As a result of taxonomic studies on these forms, more than 20 separate species, closely related to F. oxysporum s.s. have been described. However, the links of these species to the previously used formae speciales is often not clear. An example of this is the Panama disease of banana, previously considered to be caused by Fusarium oxysporum f.sp. cubense, but which is now attributed to more than 10 different species from the F. oxysporum species complex (Maryani et al., 2019).

The following formae speciales of F. oxysporum are still being used, and are included in the literature references (top left):