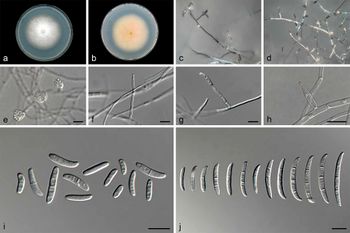 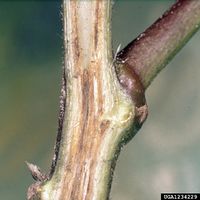 This fungus infects cotton, causing the Fusarium wilt disease of cotton, a disease which has a world-wide distribution in cotton-growing countries, and is caused by several species of the Fusarium oxysporum species complex (Lombard et al., 2019). F. gossypinum has been described from isolates collected in the Ivory Coast. It forms elliptical or curved microconidia with no or 1 septa and sickle-shaped macroconidia.

Fusarium wilt of cotton normally infects cotton seedlings through the root tips and then spreads through the vascular system. Infected plants show darkening of the veins, leaf chlorosis and necrosis, as well as discolouration of the vascular system. Stunting, wilting, defoliation and plant death follows with the green petioles often remaining attached to the stem. Yield losses can reach 50% in susceptible cultivars.

Although chlamydospores were not observed when this species was described, fungi causing Fusarium wilt of cotton have often been described as forming these durable spores. In fact they are responsible for the persistence of the disease in the soil without a host over several years. The disease can spread to other fields through vehicles and farm equipment contaminated with infested soil. Apparently, it can also disperse occasionally with infected seeds.

Management of Fusarium wilt is difficult due to the persistence of clamydospores in the soil. Resistant cotton cultivars have been developed. However, a given cultivar is not resistant against all fungi and races involved in the disease. A review of resistance in cotton has been provided by Sanogo and Zhang, 2016. Fungicide treatments of seeds, soil solarization (also combined with fungicide applications) as well as equipment sanitation have been recommended.

Publications dealing with Fusarium oxysporum f.sp. vasinfectum are included in the literature references (top left). However, this forma specialis is polyphyletic and represents several species within the Fusarium oxysporum species complex, see Lombard et al. (2019). Out of five strains of F.o. f.sp. vasinfectum analysed by Lombard et al., 3 have been identified as F. gossypinum and one each as Fusarium cugenangense and Fusarium triseptatum.