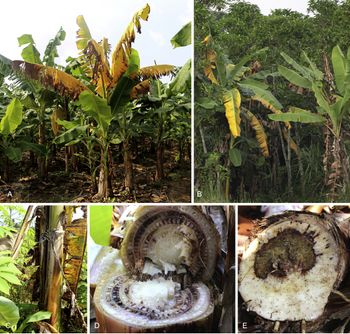 The Panama disease or Fusarium wilt of banana (previously Fusarium oxysporum f.sp. cubense) is widely distributed around the world in banana growing countries. The disease is lethal and causes serious losses, especially among native banana cultivars. It was first reported from Java, Indonesia around 1900. During the first half of the 20th century, Panama disease caused severe losses in banana plantations, until the resistant Cavendish banana was introduced. However, new races of the fungus have appeared and in the 1990s, race 4 (in particular 'tropical race 4' or TR4) was described as infecting the Cavendish cultivar. This race is under quarantine in many areas. In the meantime, breeding for resistance continues.

The fungi causing the Panama disease are part of the Fusarium oxysporum species complex (Maryani et al., 2019). They are soil-borne and invade the roots, then colonise the vascular system, causing yellowing and wilting of the leaves, starting with the older ones, and finally death of the plant. Internally, xylem vessels in the rhizome and pseudostem show necrosis. Spread of the disease is mainly through infected planting material. Limited spread through the soil and water is also possible. The fungi can form chlamydospores which persist in the soil.

Based on genetic variation of the isolates, 4 races of Fusarium oxysporum f.sp. cubense have been described, with race 1 being most commonly encountered, and the above mentioned 'tropical race 4' being initially reported from parts of south-eastern Asia, but subsequently also found in other regions (Ploetz, 2015). TR4 is now present in all the major banana producing regions, having been most recently recorded from Latin America (Stokstad 2019, Knowles 2019).

The formae speciales (f.sp.) of Fusarium oxysporum are based on the pathogenicity of the isolates on certain plants, and like the race descriptions are not taxonomically valid assignments. Even the exact identity of the species Fusarium oxysporum was not clarified until 2019, when an epitype was assigned and taxonomically described by Lombard et al.. The fungi causing the Panama disease are closely related to, but different from F. oxysporum s.s.. In total more than 10 different species of the F. oxysporum species complex have been now described as being associated with the Panama disease (Maryani et al., 2019). However, these new species cannot be necessarily linked to the previously used races. For example, tropical race 4 is equivalent to the species Fusarium odoratissimum (Ordóñez et al., 2019), but several species can be classified as race 1 (Maryani et al., 2019).