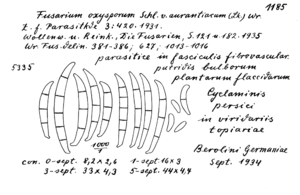 The fungus infects Cyclamen in various regions. It was first reported from Germany in 1930 and subsequently from other European countries as well as North and South America. Infections are initiated through the root tips and the fungus is then found mainly in the xylem. Tubers appear healthy from the outside but in infected plants show dark brown spots when cut open. Discolorations appear on the leaves and near the attachment of the petioles. The disease development varies from several weeks to several months and plants eventually die.