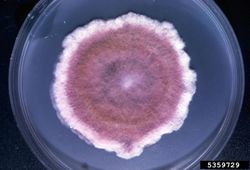 The fungus is widespread and one of the species causing Fusarium head blight. It infects various cereals. Compared to other head blight fungi like Fusarium graminearum or Fusarium culmorum, it is considered a weak pathogen. However, it produces a large number of toxins like trichothecenes, beauvericin and enniatins. Several studies have demonstrated significant correlations between F. poae levels on harvested grains and mycotoxin concentrations. Infestions apparently start mainly during the flowering stage of the host. When the heads are developing it colonizes predominantly the glume of the seeds. The macroconidia disperse by wind and rain splashes. The fungus might persists in the environment on alternative grass hosts.

Microconidia are globose to ampuliform, usually one-celled, sometimes with papilla and about 10 µm large. Macroconidia are described as short and sickle-shaped, mainly 3-septate and 20-40 x 3-4 µm large. Chlamydospores are rarely produced in culture and ascospores are unknown.

For details see the review by Stenglein, 2009.