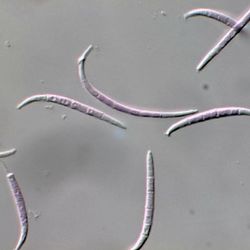 conidia of Fusarium acuminatum
Source: Fungi and Lichens of Great Britain and Ireland

The fungus is widespread and soil-borne, mainly in temperate regions. It has been reported to cause various diseases like root rot, foot rot, vascular wilt, leaf-spot and damping-off. Root infections which spread to the vascular system appear to be the most common diseases, with wheat (dryland foot rot) and other cereals like maize (stalk rot) as main hosts. It can produce the toxin deoxynivalenol which contaminates grain. On the other hand the fungus is also often regarded as being primarily a soil saprophyte and only weakly pathogenic for many crops.

F. acuminatum produces sickle shaped macroconidia with 3-5 septa. These are approximately 40-60 x 4-5 µm large. Chlamydospores are also formed in chains and have a size of around 17 x 20 μm.