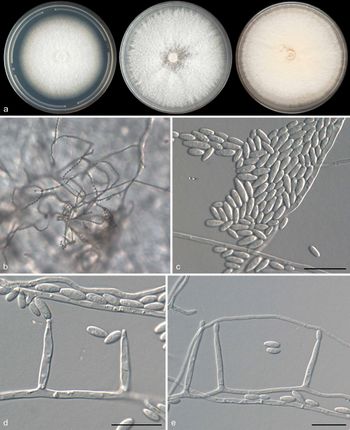 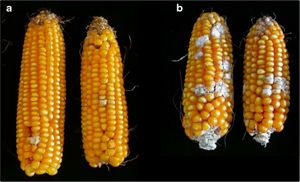 Fusarium verticillioides is a very common and economically important pathogen of maize and sorghum in warmer regions, causing losses of 10% to 30%. Apart from direct yield losses, the contamination of harvested grain with fumonisin mycotoxins is of major concern. It also causes various other diseases on a large variety of crops, for example sheath rot on rice or damping off in pearl millet.

On maize, disease symptoms include ear rot, kernel rot and stalk rot. Infected ears have scattered or groups of kernels overgrown with a white to pinkish mycelium. On closer inspection the infections often show a "starburst" pattern with the mycelium radiating out from the middle of the kernels. Symptoms on other parts of the crop in the same field can be quite variable, ranging from asymptomatic plants to severe rotting and wilting. Infections are most commonly initiated through airborne conidia invading the silk or through the seeds. Insects like the corn borer are also suspected to contaminate the ears.

The most common spores produced by the fungus are microconidia arranged in long chains. These are single-celled, about 5-12 x 2-3 µm in size and disperse easily through the wind or by rain splashes. The fungus persists in plant debris and is mainly controlled through the use of resistant cultivars.

Banana isolates are now considered to belong to Fusarium musae.