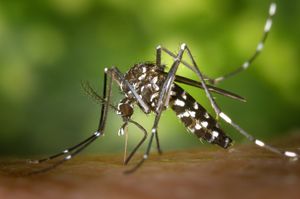 This is a very large genus of blood feeding mosquitoes with more than 700 species described. Members of this group are important pests and disease vectors. They transmit yellow fever, dengue fever, the West Nile virus, other human viruses, as well as other diseases of humans and animals. Each species has one or several preferred group(s) of hosts like humans, different mammals, birds or other vertebrates. Similarly, some species are, others are not adapted to transmitting certain diseases.

The most important disease vectors are as follows (for other species see the list below):

widespread and/or highly invasive:
A. aegypti, A. albopictus, A. japonicus, A. vexans

For breeding, Aedes prefers accumulations of clear, stagnant water and every species has its fixed environment. This may be:

The adults often have black and white stripes or patterns on their body and legs. In contrast to other types of mosquitoes, they bite only during the day. The life cycle from egg to adult can be usually completed in 2 to 3 weeks or less. Most species are adapted to warmer climates.

According to some authors, the genus Aedes should be divided into several closely related genera, like Ochlerotatus spp. and Stegomyia spp., according to others these should be treated as subgenera. Ochlerotatus is most often treated as a separate genus, based on taxonomic work in the year 2000. However, the concept of Ochlerotatus, as established in 2000, has been changed repeatedly since then, as it was found to result in a polyphyletic system. For a taxonomic review see Wilkerson et al., 2015.