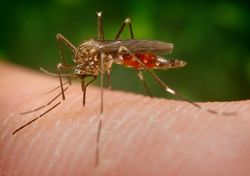 The species is native to parts of eastern Asia (e.g. southern Siberia, Japan and Korea) and has been recorded from North America since 1998 and from Europe since 2000. It has also established in some tropical areas like Hawaii where it is found particularly at higher elevations but also at sea level. The transport of used tires, one of its breeding sites, is suspected as the source of these invasions. It has been intercepted on used tire shipments. Other suspected means of dispersal are airplanes and water shipped together with imported Dracaena bamboos. 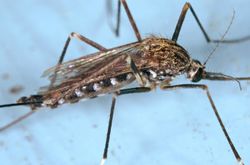 A. japonicus can transmit the West Nile virus and other diseases like Japanese encephalitis. The species is adapted to temperate climates and overwinters in the egg or larval stages. It has been found in areas where winter temperatures can reach −18°C. The eggs can also survive several months without water. It can use diverse larval habitats including natural water accumulations like rockpools, tree holes or leaf axils as well as articficial containers.

A. japonicus feeds mainly on mammals. An extended analysis of blood meals in North America detected in 36% of the cases human blood, in 60% blood from deer or possums and in 3% blood from horses. It bites during the day. The adult is dark brown with white stripes on body and legs. The development time from egg to mature adult last around 3-4 weeks