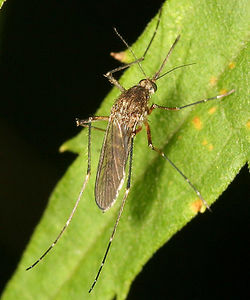 The mosquito is a wide-spread and important floodwater mosquito in holarctic regions. It can reach high population levels in spring and early summer. The main hosts are mammals, including humans, it rarely feeds on birds. A. vexans is a vector of various diseases, depending on the location. These include Tahyna virus, eastern equine encephalitis and dog heartworm (Dirofilaria immitis).

A. vexans is an aggressive mosquito with a long flight range. It has been a major problem in the flood planes of European rivers before levees were constructed. Typically, eggs are laid on the soil of wet grassland and hatch when they are flooded. They do not float and in the absence of floodwater or heavy rain they can survive for several year. The development from egg to mature adult lasts around 3-5 weeks, depending on the temperature.

The adult is about 6 mm long and brownish. The palps and proboscis are dark with whitish tips. The dorsal parts of the thorax and abdomen have small, rounded light grey or whitish patches. The tarsi of the hind legs have white bands at the base of the segments.