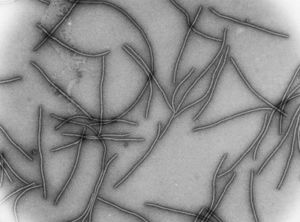 This is a large genus of plant viruses which are related to the Potato virus Y, the type species. The members are characterized by filamentous particles, between 720 and 850 nm long and are transmitted by insect vectors (mainly aphids). The viruses multiply in the cytoplasm of the host cells where they form cylindrical inclusions (pinwheel structures, scrolls and short curved laminated aggregates). The genome is a monopartite, linear, single-stranded positive sense RNA molecule with up to 10,000 nucleotides. It has a poly A tail at the 3‘ end and a genome-linked protein at the 5‘ end. The genome is translated into a polyprotein.