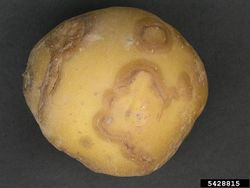 The virus causes serious diseases of potatoes (potato tuber necrotic ringspot), tobacco (tobacco veinal necrosis), green pepper, tomato and other crops. Infections of potato result in unmarketable tubers and up to 80% yield losses. The virus has a world-wide distribution.

Different strains have been described (e.g. PVYC, PVYN, PVYO or the recombinant PVYNTN), based on serological and molecular properties. Some strains cause only minor damage. The symptoms depend on the strain and the host plant. For example PVYNTN causes tuber necrosis while tubers are symptomless with the other strains. Other symptoms include chlorosis, stunting and leaf mottling. PVYNTN is the most destructive strain, causes potato tuber necrotic ringspot disease and develops within 1-2 weeks after inoculations.

PVY is transmitted (non-persistently) through various aphid vectors like Myzus persicae. It survives in the tubers until the next growing season. The main means of control are the use of healthy seed potatoes and resistant varieties.

PVY is the type species of the genus Potyvirus and is characterized by long flexuous particles, about 730 x 11 nm in size and a single stranded, unipartite RNA genome, about 10000 bases long.