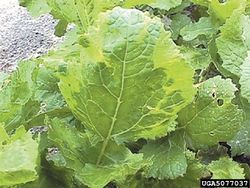 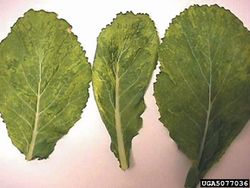 The virus is widely distributed and can infect many crops, mainly from the family Brassicaceae. However, legumes and ornamentals from other families may also become infected. The most common symptoms are a mosaic of light and dark green areas on the leaves as well as vein banding, chlorotic ring spots and black leaf spots. Necrosis, chlorosis and malformations of the leaves might also occur.

Early season infections can cause significant yield losses. E.g. around 50% losses have been reported in the marketable cabbage heads in Kenya, in horseradish harvests in Poland, or in canola harvests in the U.K. and in Canada. The virus is transmitted by various aphids in a non-persistent manner, e.g. by Myzus persicae or Brevicoryne brassicae. Mechanical transmission is also possible. The incubation period is 2-4 weeks. It persists between seasons on weedy Brassicaceae hosts.

Control is often difficult. Sanitation (removal of infected crops and weed control) is recommended. Vector control with insecticides is considered to have little effect. Some resistant cultivars have been developed. However, resistance breakdown due to the appearance of new pathotypes of the virus has been experienced, especially when the resistance has been based on single-genes.