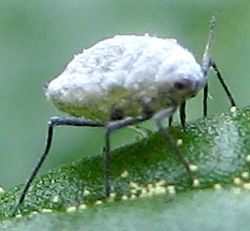 The aphid is a serious pest of crucifers (plants of the family Brassicaceae) with a world-wide distribution in temperate and subtropical regions. It is believed to be native to Europe. Heavy infestations can result in the whole plants being covered by aphids, causing yellowing, wilting, stunting, leaf curling and other deformations. Infestations can lead to total crop losses. The aphid also transmits various plant viruses in a non-persistent manner like the Cauliflower mosaic virus or the Turnip mosaic virus.

Eggs are laid in autumn, overwinter and hatch in the spring when viviparous females develop. As colonies expand, winged females are formed which disperse to other plants. In autumn, sexual stages develop again, mate and lay eggs. However, viviparous females may also overwinter in mild climates and some populations consist entirely of females. The development time from egg to adult lasts around 2-4 weeks depending on the temperature. There may be up to 15 generations per year.

Management actions are recommended when more than 2% of the plants are infested. Preserving natural enemies is important. The control options include reflective mulch, insecticidal soaps and various other insecticides which have little impact on beneficials. However, they need to be used together with a wetting agent to overcome the wax coatings of the aphids. Ploughing immediately after harvest is suggested to prevent spread of the aphid, as is rotation with a non-cruciferous crop. Cultivars with some resistance to the aphid have been also identified.

Apterous adults are 2-2½ mm long, grayish-green and covered with a white powder. The siphunculi are comparatively short. Winged adults have a dark green or dark brown thorax and a yellowish green abdomen. There are two dark dorsal spots on the abdominal segments which merge in the last segments.