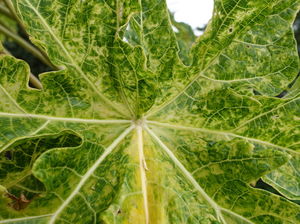 papaya leaf with symptoms of infection by the Papaya ringspot virus (click on image to enlarge it)
Author: Scot Nelson, Hawaii
Source: Flickr

The virus is common in tropical and subtropical regions. It infects papaya, cucurbits and some other crops. The symptoms include ringspots and bumps on the fruits as well as yellowing, distortion, and severe mosaic on the leaves. The virus caused serious losses of papaya in Hawaii, starting in the 1950s but its impact has been reduced since the 1990s due to the introduction of resistant cultivars. It is transmitted by various species of aphids.

Two forms of the virus have been described and this page only covers the typical form. The watermelon form, called PRSV-W, mainly infects cucurbits and is considered to represent a separate species, see Papaya ringspot virus W.

The virus contains a single positive-strand RNA molecule of approximately 10 kb. The RNA encodes a large polyprotein which is processed by 3 virus-encoded proteinases, the P1 protein (P1), the helper component proteinase (HC-Pro) and the nuclear inclusion protein a (NIa).