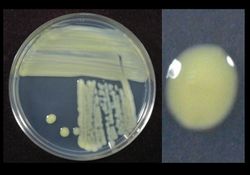 The genus includes a large number of plant pathogens, several causing serious diseases. The species of Xanthomonas are Gram-negative rod-shaped bacteria, about ½-1 µm long. They produce a non-diffusible yellow pigment on growth media. They do not have a resting stage and some have a single polar flagellum. Usually they are catalase positive and oxidase negative.

Previously, pathovars and species have been described on the basis of their host plants and symptoms. This system has been replaced by a classification based on the structure of the 16S ribosomal DNA. The plant diseases caused include canker diseases (e.g. citrus canker), blight diseases (e.g. bacterial blight of rice) and rots (e.g. black rot of crucifers).