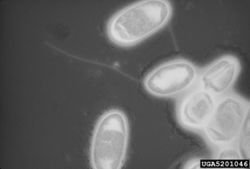 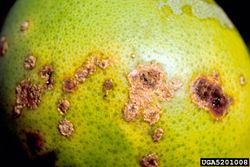 symptoms of citrus canker on citrus fruit (click on image to enlarge it)
Source: Florida Department of Agriculture and Consumer Services - IPM Images

Economically, citrus-infecting forms of Xanthomonas citri are the most important and widespread ones, especially the Asian form (pathotype A). This form is apparently native to tropical and subtropical parts of Asia, but absent and a quarantine pathogen in Europe. Infected fruits have a reduced market value or may drop prematurely.

The bacterium overwinters in lesions of leaves and shoots and causes new infections under warm and moist conditions. New infections start by bacteria entering through stomata or small wounds. These start as pin-point spots on the lower leaf surface around 1 week after the infection. As the lesions enlarge they become tan or brown, corky and finally crater-like with a raised margin and a sunken centre. Cankers also appear on shoots and trunks. Short- and medium distance spread occurs through rain splashes and strong winds which can carry the bacteria up to 50 km under extreme conditions. Long-distance spread involves the movement of infected planting material or infected fruits.

Control is practised by planting resistant cultivars and by applying copper bactericides. The disease has been eradicated in some areas. Windbreaks have been also suggested as a means of disrupting the transmission through rain splashes.

For reviews of citrus canker see: