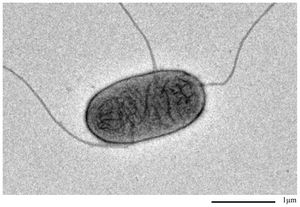 Bacteria are small (typically up to 2 µm), single-celled organisms without nucleus but with a cell wall. Many species are mobile by using flagellae. Plant pathogenic species do not form spores and may persist saprophytically on the plant host without invading the cells. However, they also produce enzymes which break down the cell wall of the host plant, resulting in the bacteria entering the plant causing a variety of diseases.

Note:
This page only deals with plant pathogenic bacteria. For other groups of bacteria see

The following genera and individual species are currently entered under "bacteria":