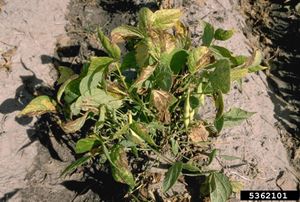 This bacterium causes wilt diseases of dry beans and other crops. It is widely distributed around the world and a number of pathovars infect various types of crops. However, it has been mainly a problem in some areas of North America on dry beans (as Curtobacterium flaccumfaciens pv. flaccumfaciens) from where it was first described in 1921. In that year, a farmer had lost 90% of his dry bean crop the previous year and when he replanted the area with seeds saved from that crop, the disease incidence was 22%. Bacterial wilt of dry beans became a major pathogen in the central high plains of the U.S. between 1930 and 1970.

After 1970, the disease incidence decreased in dry bean fields in the affected areas of North America and the disease had virtually disappeared by the early 1980s after the implementation of cultural practices such as sanitation, rotation, and planting clean, disease-free seeds. Nevertheless new cases and new outbreaks started to appear again in the area in 2003 and 2004. The research results since 2003 have suggested that the re-emergence of the disease is not due to a single factor but a combination of new changes in cultural practices (such as widespread use of reduced tillage), environmental stresses, and unfamiliarity with the pathogen and its past history (Harveson et al., 2015).

"Curtobacterium" means a short bacterium and "flaccumfaciens" describes that it induces a wilt disease (flaccus = hanging down, faciens = doing). For a review see Osdaghi et al. (2020).