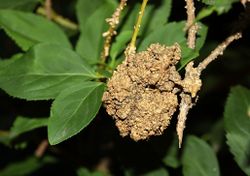 gall caused by Agrobacterium tumefaciens on Forsythia (click on image to enlarge it)
Source: Wikimedia Commons

The bacterium causes crown gall on fruit trees and vegetables. It is soil-borne and infects plants through small wounds. The galls are typically caused on roots or at the crown (the border area between stems and roots). Some hosts are infected systemically, causing tumors along the vascular system of the trunk or stems.

The disease has a very large host range, but fruit and nut trees, as well as woody ornamentals are most frequently attacked. The bacterium spreads by the galls which are easily detached from the host. It will also disperse via contaminated soil and farm equipment.

During the infection process, the bacterium transfers one or more DNA fragments to the nuclei of the plant host, using a "tumor-inducing" (Ti) plasmid. The plant cells then produce excessive mitogenic phytohormones as well as nutrient sources for the bacterium. The latter are called opines.

A. tumefaciens is a Gram-negative, aerobic and bacilliform bacterium, approximately 3 x 1 µm large. It has become very important as a tool for inserting new or altered genes into plants and thus modifying them genetically.

For additional literature on this species, see Rhizobium radiobacter.