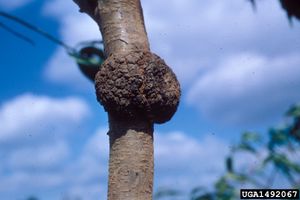 The bacterium is considered taxonomically identical to the crown gall causing species Agrobacterium tumefaciens. It was described first and this name should have taxonomic priority (Young et al., 2001). However, the name A. tumefaciens is still commonly used by plant pathologists and by scientists working on genetically modified plants.

For details and for additional literature on this species, see Agrobacterium tumefaciens.