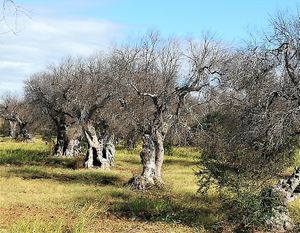 This species is a Gram-negative bacterium which infects the xylem of certain plants, causing diseases like citrus variegated chlorosis, Pierce's disease of grapevine or leaf scorch of almond, coffee, pear, pecan and other trees. It is wide-spread in tropical and subtropical parts of the Americas and since 2013 has been also reported from several regions in Europe and Asia. Symptoms include scorching of the leaves, yellowing, stunting, dwarfing, die-back and the development of small fruits, depending on the host plant. The symptoms often resemble drought effects. Leaf scorch, the main symptom, affects the marginal parts of the leaves which dry off and are separated from the green leaf areas by a yellow margin. A large number of hosts have been recorded and different subspecies have been described which appear to be specialised on a smaller group of host plants and often have a more restricted distribution.

Since 2015, several forms of the bacterium have been reported from France where it infects mainly the ornamental shrub Polygala myrtifolia. In 2016 an infected cherry tree was found in the Balearic Islands (Spain) and infected oleander plants were reported from Germany. Since 2017, the typical form infecting grapevine (Pierce's disease) has been reported from Mallorca, Spain. Attempts have been and are being made to eradicate new introductions which are apparently caused by the import of infected plant material.

The bacterium can be cultured on artificial media but grows very slowly. It has a rod-shaped form, about 1-3 µm long, and has pili (hair-like extensions) on its surface. While the bacterium can easily move upwards with the xylem fluid of the plant, the pili also enable the bacterium to move slowly downwards.

X. fastidiosa is transmitted by a variety of xylem feeding leafhoppers (Cicadellidae) and also by some species of froghoppers (Cercopidae). For example, the glassy-winged sharpshooter, Homalodisca vitripennis, transmits Xylella fastidiosa subsp. fastidiosa causing Pierce’s disease of grapevine in southwestern North America. The bacteria attach themselves to the foregut wall of the leafhopper vector and are passed back into the xylem with the saliva of the vector. For reviews on the insect transmission of this disease agent see Krugner et al. (2019) and Overall and Rebek (2017).

Management of the disease has proven difficult. Providing plants with enough moisture, e.g. through mulching, can delay the disease development. Also using resistant cultivars has shown some promise. Since many regions are free from the disease, quarantine procedures are of particular importance for confining the pathogen.

Forms of X. fastidiosa that cause citrus variegated chlorosis and Pierce's disease of grapevine are among the most destructive varieties of the bacterium. Various other subspecies have been also described as listed below.

For a review and diagnostic procedures see the respective EPPO datasheet (2019).