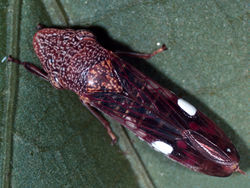 This leaf hopper is native to southeastern North America and was accidentally introduced into California (around 1988) and some Pacific islands. It is an important vector of Xylella fastidiosa and feeds on the xylem of branches and stems of a large variety of plants, including grapevine and citrus. In California it transmits 2 forms of the Xylella fastidiosa bacterium, Xylella fastidiosa subsp. fastidiosa causing Pierce’s disease of grapevine and Xylella fastidiosa subsp. sandyi causing leaf scorch of oleander. When the leafhopper feeds on an infected plant the bacterium adheres to the precibarium wall of the foregut, but is lost during molting. This means only adults can transmit the disease to another plant. The adults can fly for about 100 m, but will only do so when searching for suitable host plants. In California almost 20% of the adult leaf hoppers carry the disease and the transmission success is around 80%.

Control with insecticides has been successful on grapevines. Several egg parasitoids have also shown promise as biological control agents. In California, an area-wide program has started which uses pesticides as well as the mass-release of parasitoids. The latter particularly in urban areas.

The female leafhopper lays an egg cluster on the underside of a leaf. The eggs are covered with a white powder produced by 2 patches on the forewings. The development from egg, through 5 nymphal stages, to mature adult lasts between 1 and 2 months, depending on the temperature. There are 2 or more generations per year.

The adult is about 12-14 mm long and can live for several months. It is dark brown to black dorsally with lighter spots on the head and notum. The forewings are transparent with red veins. Females have white lateral patches on the wings. The ventral side is yellowish with some black marks on head and thorax, but whitish with black marks on the abdomen. The nymphs have a grey colour.