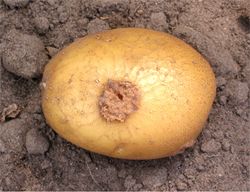 This is a large genus with over 500 species of soil-inhabiting bacteria. They are mainly saprophytes but various species are known to be important plant pathogens attacking roots and tubers. Streptomyces scabiei and related species like Streptomyces acidiscabies or Streptomyces turgidiscabies are widespread and cause potato common scab and other crop diseases. The symptoms of common scab are superficial, raised and pitted lesions on the potato tubers that reduce their marketability.

The bacteria are aerobic and Gram-positive. They resemble fungi and are filamentous, forming branching hyphae in a "mycelium" as well as spores (conidia). Following a period of vegetative growth the species produce aerial hyphae which rise over the substrate once the nutrients are depleted. The aerial hyphae are transformed into spores with thick walls which become dormant, disperse and later germinate.