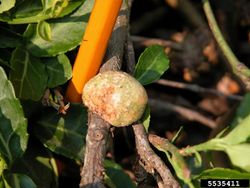 The bacterium causes a wide-spread and serious disease of grapevine which can result in significant losses, especially in nurseries. The typical symptoms are tumorlike growth structures on the stem. The affected tissue dies and results in chlorosis, stunting, reduced yield and eventually plant death.

The disease agent enters the stem or a root through small wounds, e.g. those caused by freezing temperatures. Frost-tolerant cultivars are more resistant to the disease.