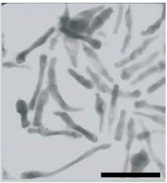 The bacterium infects the xylem of sugarcane and other plants and is widely distributed in sugarcane-growing regions. There are few external symptoms apart from stunting and thinner stalks. However, internally the xylem shows necrotic streaks and reddish discolourations below the nodes of mature stalks as well as a diffuse pink zone below the apical growing point. Yield losses between 5 and 30% have been reported. The disease spreads with sugarcane cuttings and contaminated farming tools.

The disease was first recognised during 1944/45 in Queensland, Australia and subsequently found to be widespread in sugarcane growing regions around the world. It could have originated in Java during the 1920s, when wild Saccharum spontaneum were crossed with cultivated Saccharum officinarum plants, and resulting hybrids were then distributed to other regions (Young, 2016).