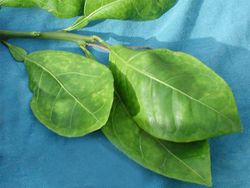 citrus huanglongbing symptoms on orange leaves (click on image to enlarge it)
Author(s): Richard I. Davis, Secretariat of the Pacific Community
Source: PaDIL

Several members of this genus cause serious diseases of citrus in south-eastern Asia, southern Africa and America. The infected trees are stunted with few leaves and dead shoots. The genus is also associated with the zebra chip disease of potatoes. The Gram-negative bacteria are nonculturable, not flagellate and usually heat sensitive. They belong to the Rhizobiaceae (α-proteobacteria) and are transmitted by psyllids in a propagative, circulative and persistent manner.