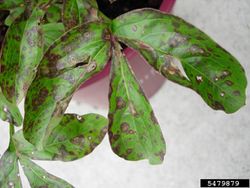 This bacterium is widely distributed and is related to Xanthomonas campestris. It also infects a large variety of plants, causing blight, leaf spot, or necrotic streaks. A number of pathovars have been described and some of these have been regarded as separate species. However, this has not been accepted by all authors. Economically, the most important pathovar is probably Xanthomonas hortorum pv. pelargonii (see the separate page), other pathovars include for example: