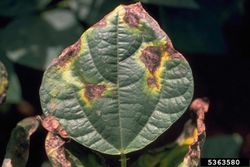 The bacterium has a world-wide distribution and infects beans causing yield losses of up of 50% in susceptible cultivars, as well as a reduced seed quality. Occasionally other legumes (Fabaceae) may also be hosts and several pathovars have been described that infect other plant families. For example, Xanthomonas phaseoli pv. manihotis infects cassava. The bacterium enters the plant through small wounds or stomata. It causes water-soaked spots on the leaves which enlarge and become necrotic with a yellow halo. Pods can show similar symptoms and seeds become infected, rot or show discolourations. Seedlings germinating from infected seeds might die.

The disease develops rapidly under warm and wet conditions and the bacterium spreads to neighbouring plants through rain splashes. Infected seeds are also important sources of infection as well as dispersal. The bacterium can persist in seeds and plant debris for several years. Disease management relies mainly on resistant cultivars. The use of uninfected seeds, crop rotation, and deep plowing of infected straw are also recommended, but are not always effective.

The bacterium is Gram-negative, rod-shaped and approximately 1-2 µm long, with a single polar flagellum. Unlike the related bean pathogen Xanthomonas citri (form fuscans) it does not form a brown melanin pigment on media containing tyrosine or on MXP medium. Reliable identification requires PCR analysis and DNA sequencing.

There is a separate page for Xanthomonas phaseoli pv. dieffenbachiae.