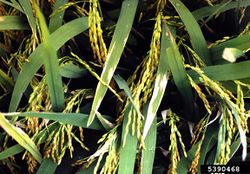 The bacterium is found in tropical and subtropical rice growing parts of Asia and in other regions. Apart from rice, several species of grasses can also become infected. It can cause crop losses of more than 50%. The leaves of infected plants have pale yellow or whitish, longitudinal lesions, starting at the tips. The disease results in wilting and often in plant death.

Small droplets, filled with bacteria, ooze from the lesions and the bacterium then disperses through wind, rain splashes or irrigation water. It enters the plants through small wounds in the roots or leaves. The disease persists in plant debris and weedy hosts. Seeds may also contain the bacterium. Although it is not clear if these seeds develop into infected seedlings, they can introduce the bacterium into the environment and can be involved in long distance spread of the disease. Management relies mainly on resistant cultivars and the use of bactericides. However, various pathotypes of the bacterium have been described and some resistance genes are not effective against all pathotypes.