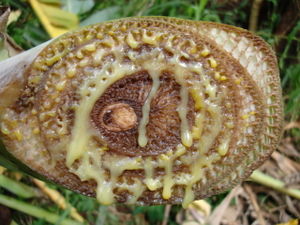 This pathovar causes bacterial wilt of banana, a very important disease in eastern Africa. The disease was first noticed in Ethiopia on enset or false banana (Ensete ventricosum) in 1968 and later also on Musa bananas. Since 2001, it has been reported from other parts of Africa like Uganda, Kenya, Tanzania and DR Congo.

Banana bacterial wilt is apparently transmitted by insects which contaminate small wounds, mainly on the bracts of the male flowers (Nakato et al., 2014). Other means of spread include infected planting material, contaminated farming tools and animals which feed on the banana rhizomes. The bacterium spreads within the plant through the vascular system and causes folding and yellowing of the leaves as well as rotting.

Recommended control methods include the timely debudding of male flowers and removing single diseased stems. The removed plants are then burned and buried. The use of clean farming tools is further very important. Research efforts are ongoing to find resistant banana cultivars.