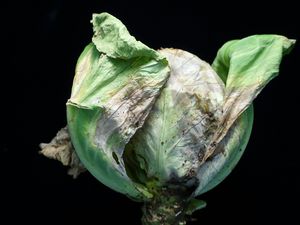 The pathogen causes a widespread and important disease of Brassica species and other crucifers. Yield losses of more than 50% have been reported. The symptoms include characteristic necrotic V-shaped lesions on the leaf margins and blackening of the vascular tissues.

The Gram-negative bacterium is seed-borne and can also spread through wind, rain splashes and irrigation water. Plants become infected by the bacterium entering through small wounds in the leaves or roots or through hydathodes and stomata. It then colonizes the vascular system causing the black veins. Disease development is favoured by warm and humid conditions. Between seasons, the bacterium persists in plant debris (up to 2 years) or in weedy alternate hosts.

Control is difficult and relies on the use of pathogen-free seeds and other planting material as well as on the removal of infected crop debris and cruciferous weeds which can harbour the disease. Only one contaminated seed among 10,000 healthy ones can trigger an outbreak after planting. Resistant cultivars have been developed, but several races of the pathogen are known which react differently to different cultivars. Races 1, 4 and 6 are most common. Broad-spectrum resistance is known from Brassica  rapa and Brassica  carinata, but is very rare in Brassica oleracea.