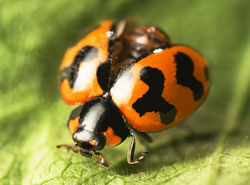 Ladybird beetles are often used as biological control agents, e.g. against aphids, scales and mealybugs. On the other side, the mass release of several species has resulted in negative effects on the environment.

The family includes more than 5,000, usually colourful and hemispherical species. The head is partly concealed by the pronotum. Many species contain toxic alkaloids as defence against predators and the bright colours are warning signals for potential predators.

The following genera and individual species are currently entered under Coccinellidae (predators):