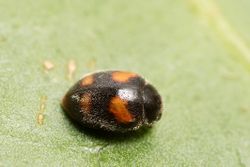 Nephus is similar to the genus Scymnus in morphology, colouration and size. However, the species lack the prosternal carinae. Like in Scymnus, the colour of Nephus species is often black with a few red or orange spots.