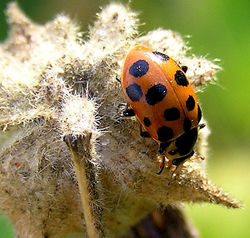 This genus of ladybird beetles contains around 35 species, mainly found in North America, Europe and northern Asia. Some species have been introduced to the southern hemisphere. The genus includes important natural enemies of aphids like Hippodamia convergens and Hippodamia variegata.

The species of Hippodamia are about 4-5 mm long with an elongated and oval body. The orange elytra have various patterns of black marks. The genus is similar to the genus Coccinella, especially species like Hippodamia variegata. Both genera can be separated by a number of morphological characters, e.g. on the tarsi, tibia and elytral margin.