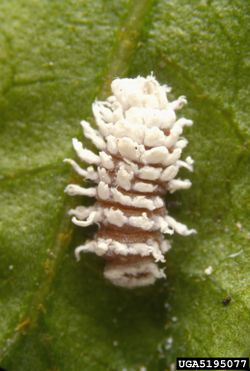 The beetle is a predator of mealybugs and scale insects in warmer regions or in greenhouses. It is endemic to Australia and some Pacific Islands and has been one of the first biocontrol agents. It was imported into California in 1891 against the citrus mealybug. The species is produced commercially and has been introduced into more than 40 countries. However, it cannot survive cold winters and is therefore released periodically in some crops (e.g. Maes et al., 2015).

The female lays its eggs near mealybug colonies and the larvae actually resemble mealybugs. The adults are around 4 mm long, black with reddish head, prothorax and hind margin of the elytra. The life cycle from egg, through 4 larval stages, to mature adult, last about 8 weeks.