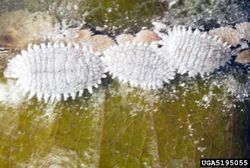 The mealybug is a widespread and polyphagous pest in subtropical and tropical regions around the world. Crops which are frequently infested include citrus, grapevine, coffee and cacao. Greenhouse ornamental plants may be colonizes in temperate regions. Feeding by the colonies causes yellowing and at high densities wilting. The insects excrete honeydew which causes sooty molds (and also attracts protective ants), making fruits unmarketable. Severe infestations have been reported to cause defoliation and fruit drop. P. citri is able to transmit virus diseases to several host plants, e.g. Grapevine leafroll-associated virus 3 to grapevine.

Females deposit groups of 5-20 yellowish eggs (ovisacs) which are covered with wax. Development from egg through 3 (females) or 4 (males) nymphal stages to the adult stage typically lasts around 2 moths, less in warmer climates. There are several generations per year. P. citri disperses by wind in the crawler stage or through the transport of infested plants. Nymphs and adult females can crawl short distances.

Control can be difficult. Spray oils or insecticides are often used, but should be avoided if natural enemies are common.

The adult female is about 3-5 mm long, slightly yellowish or reddish with a light gray longitudinal dorsal stripe and covered with white wax secretions. There is a ring of lateral wax filaments around the body. The winged adult male has 2 long filaments at the tip of the abdomen.