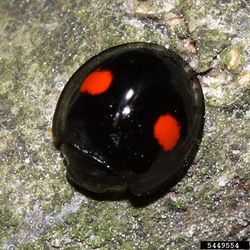 This genus is widely distributed and contains around 80 species of small to medium-sized lady beetles. A number of species are recognized as beneficial predators of insect pests, especially of scale insects and aphids. These include, for example, Chilocorus bipustulatus and C. nigritus.

The adults are around 3-5 mm long. The colour is often black or brown with a red or white spot on each elytrum. The genus is characterized, among others, by the tibiae having a blunt projection at their base on the outer margin.