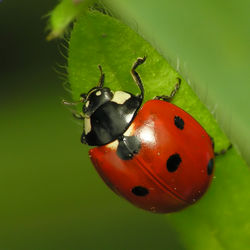 The genus has a world-wide distribution and around 70 species. The adults often have the typical and familiar appearance of ladybird beetles, red with black dots. Both adults and larvae feed mainly on aphids but pollen, scale insects and mites might also be included in the diet.

The adults are typically 5-10 mm long with red or orange elytra which have black dots or transverse markings. The pronotum is black and usually has two lateral white spots. Legs and the rest of the body are also black. The antennae have 11 segments including a terminal 3-segmented club. Adults of the genus Adalia have a similar appearance.