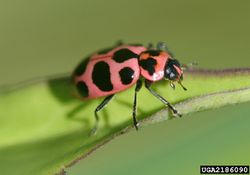 This is a small genus of ladybird beetles with less than 5 species which are restricted to the new world. The most important species for biological control is the pink spotted lady beetle, Coleomegilla maculata. That species is highly polyphagous and mainly found in North America. However, it is also present in Central and South America.