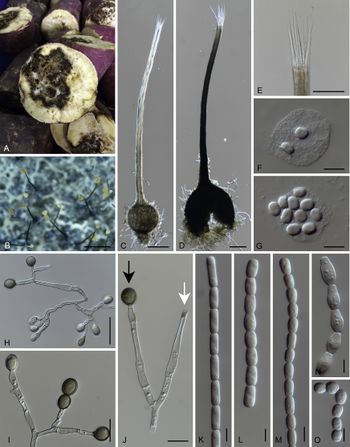 This genus of fungus has a world-wide distribution and contains important plant pathogens, causing root rot, canker, vascular stain and wilt diseases. Important species in forestry and agriculture are, for example, Ceratocystis fimbriata causing root rot and canker on a large variety of trees and other crops and Ceratocystis platani causing canker and wilt of plane trees in Europe and North America. For other species see the list below.

The genus has been traditionally characterized by ascomata with round usually dark bases that are sometimes ornamented. These bases extend into long necks which release the ascospores at the tip. The conidia are rectangular or dark barrel-shaped. Following molecular analyses, the genus has been restricted to species with the ascomatal bases lacking distinct ornamentations and hat-shaped ascospores. Related genera are:

The type species of the genus is Ceratocystis fimbriata.

The following species are currently entered under Ceratocystis (genus):