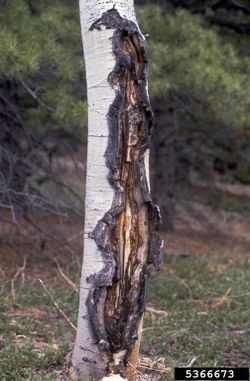 The fungus causes wilt and canker stain on plane trees. It is considered to be native to North America and has been introduced into Europe during World War II. It is still spreading there and is recommended for regulation/control (EPPO list A2). C. platani has been reported from Italy, France, Switzerland and Greece. It has been eradicated in Spain. The disease can be transmitted by contaminated pruning tools, farm machinery and can spread through the soil. Wood chips might harbour the fungus for several years.

The most susceptible species are Oriental plane (Platanus orientalis), native in southern Europe, and the popular "London plane" (a hybrid between P. orientalis and P. occidentalis). Serious outbreaks with extensive tree mortality (up to 90% of susceptible species) have been reported from North America in the 1930s and 1940s, in Italy in the 1970s and 1980s and in Greece after its first report there in 2003.

Infections lead to greyish to brown discoloration of the wood and a reddish to bluish stain on the bark. However, no callus is formed. Externally, the whole canopy or a single branch can begin to show chlorosis and wilt. Infected trees usually die within 5-7 years. The main management approach in Europe is to prevent a further spread of the fungus. Chemical control is very difficult and new disease pockets need to be placed under quarantine and monitored. Infected plane trees should be destroyed.

The species is part of a complex of closely related species. E.g. it has closely similar features to Ceratocystis fimbriata and C. cacaofunesta. It can be recognized by the morphology and color of the perithecia and by other characters like the hyaline endoconidia. However, the use of PCR is the most reliable identification method.