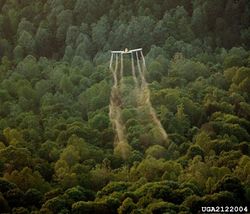 The bacterium forms protein crystals which are toxic to specific groups of insects. These dissolve and are activated inside the gut. They then attach themselves to specific receptors of the gut wall and induce the formation of pores in the gut wall, allowing the bacteria to enter the hemocoel of the host and multiply.

The resulting infection is lethal to the insect host. Since this mechanism involves a number of specific biochemical processes, a given toxin only acts rather specifically on a certain group of insects, e.g. a number of species from a specific family. For example Bacillus thuringiensis var. israelensis produces 4 types of crystal toxins (Cry4A, Cry4B, Cry11A, and Cyt1A) which are mainly active against mosquitoes from the family Culicidae. Lepidoptera, Coleoptera and Diptera are the most common groups of insect hosts which are susceptible to these specifically acting crystal toxins (Cry toxins). They are also called endotoxins because there are confined to the B.t. cells. 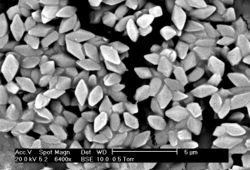 Some other types of toxins, also produced by some varieties of B.t., are diffusable or secretable, so-called exotoxins, or "vegetative insecticidal proteins" (VIP-toxins). In contrast to the endotoxins, the exotoxins or VIP toxins have a broad host range and are active against a broad spectrum of lepidopterans, coleopterans and even sap-sucking insect pests. Since the specifically acting Cry toxins are often more desirable for biological control, the diffusable exotoxins are often removed from a B.t. sample by washing, that means repeatedly suspending the B.t. cells in water followed by centrifugation.

For details see the different varieties of Bt and toxins listed below (many are produced commercially). For references to papers dealing with transgenic crops expressing the insecticidal proteins of B. thuringiensis see Bt genes in crops. In addition there is a review on the respective page in Wikipedia.

The system includes the following pages on subunits like varieties or specific endotoxins for Bacillus thuringiensis: