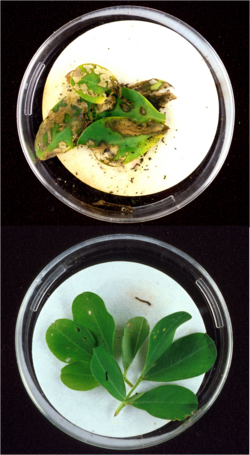 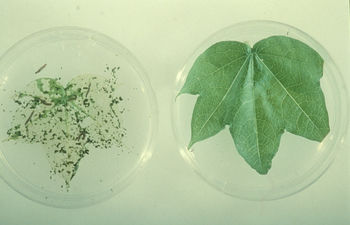 genetically modified cotton (on the right) is protected against insect attacks compared to conventional cotton (on the left)
Author: CSIRO
Wikimedia Commons

Genes of Bacillus thuringiensis involved in the production of insecticidal endotoxins can be inserted into the genome of crop plants. These transgenic crops (or Bt crops) then produce the toxins and protect them against certain groups of insect pests.

Such Bt crops are widely planted in certain regions. In Brazil, more than half of the area planted with maize in 2010/2011 had grown Bt cultivars. While Bt crops are considered save to humans and livestock, their use can result in the selection of resistant insect strains. Therefore, the use of Bt crops has to be accompanied by certain resistance management procedures.

Incorporating the genes for the production of several types of endotoxins into a crop can improve their protection against pests. For example, incorporating the genes for both the toxins Cry1A and Cry2A into maize plants has decreased infestations by the corn earworms. Such modified crops are called pyramided Bt crops. However, pests can also develop resistance against pyramided Bt crops (e.g. see Dively et al. 2016).