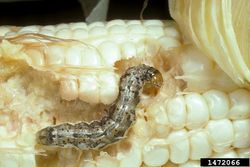 This moth is regarded as an economically important pest in the Americas, infesting crops like maize, cotton, soybean, vegetables and many other crops. The host range also includes some weeds. However, in North America, the impact on grain yield and quality of maize appears to be small (Bibb et al., 2018).

The insect does not overwinter in areas above ~40° latitude in North American, but regularly invades these areas by migration. The caterpillars feed mainly on buds and developing fruits, but may also bore into the whorls or stems. The development from egg, through 5-6 larval stages to mature adult lasts 3-8 weeks, depending on the temperature. Correspondingly, the number of generations per year ranges from 1 to 5 or more.

The caterpillars have a variable color from light green to dark brown. Usually there is a dark band along each side, followed by a lighter, more ventrally located band. The adult has a wingspan of about 4 cm. The forewings are brownish, often with a central dark spot and a broad darker band across the apical half of the wing.

Helicoverpa zea is very similar in morphology and biology to the old world species Helicoverpa armigera. Both species can interbreed.