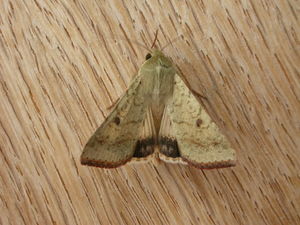 Helicoverpa armigera (on the hind wing, the pale spot inside the dark border is typical of H. armigera (in contrast to related species like H. punctigera)
Author: Donald Hobern
Source:Wikimedia Commons

The moth is widespread in southern Europe, Africa, Asia and Australia/Pacific, where it is a serious, highly polyphagous pest of cotton, maize, tomatoes and many other crops. It is also found in central and even northern Europe during the summer. It is frequently intercepted by quarantine in America and since 2012 has been recorded from Brazil where it is already associated with substantial crop damage (Mastrangelo et al., 2014). The South American population has been shown to hybridise with the native Helicoverpa zea (see Anderson et al., 2018).

The larvae prefer the buds, flowers and fruits, but may also damage the leaves. On cotton, it bores into the bolls, causing shedding of the bolls and inferior lint quality. The species is considered economically to be one of the most important insect pests world-wide. The insect is found in a wide range of climates and has adapted to tropical, subtropical and temperate conditions.

The development time for the larvae lasts from about 30 days at 20°C to about 20 days at 25°C. In temperate regions, it might enter a pupal diapause during the winter. Under favourable conditions the total development time from egg, over 6-7 larval stages, to mature adult might be as short as 5-6 weeks and the insect can go through up to 4 generations per year.

The adults have a wingspan of 3½-4 cm. There is considerable variation in colour both on the adults and the caterpillars, the latter reach a length of about 4 cm. It its most closely related to Helicoverpa zea of the New World and both species are able to interbreed.