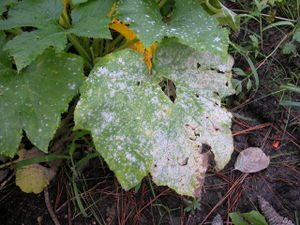 The fruiting bodies are usually minute (e.g. less than 100 µm in diameter) and closed. Often they have special appendages. Typically, the mycelium is confined to the surfaces of leaves and stems. They attack only the epidermal cells and form conidia and asci on these surfaces.

Note:
This page only deals with plant pathogenic Erysiphales. For other groups see

The following genera and individual species are currently entered under Erysiphales: